Today's weather was sub-par at best.  Between the off and on rain, cooler temperatures, humidity, and just general gross-ness, it looked like it was shaping up to be what I used to refer to as a really, really good day not to run.  But the schedule had a long run planned for today, and so long run I did.  It was six miles total, which isn't really all that far off of what I was running prior to training (5 miles), and went by surprisingly quickly.  Especially after the last mile went from a slow jog to a Usain Bolt-like sprint after a dog decided to chase me. (In retrospect, maybe it was just trying to race me?)   Thankfully, I finished the run with all of my limbs intact and without any puncture wounds, which allowed me to make this soup.  And oh, is this soup worth a run in the rain and a dog chase.  I would go so far as to say that this is the best soup I've ever eaten.  It has about a billion ingredients, but it's easy to make and nearly impossible to mess up.  Just throw everything in, cook, and eat.  I'm sitting here trying to type any words that do justice in describing this soup, but I can't, so just try it. 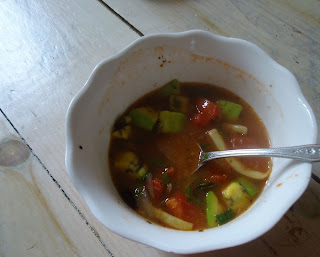 Confession: I'm not a professional food photographer at my other job.

1/2 can of stewed tomatoes, Mexican style.  I used only half the can of tomatoes, but all of the juice.
2 cans of water, drained from the stewed tomatoes (Just fill the can with the leftover tomatoes up with water, then pour it through a strainer into the pot.)
1/2 can of black beans
1/2 can of white beans (It called them "Great Northern" beans on the can, but that sounds more like the name of a constellation, so I'm calling them white beans.)
1/2 of a tomato, cut about the size of the stewed tomatoes
1/2 cup of wax beans (I really only added these because we had just harvested a ton of them from the garden.  They add a nice crunch, but if you don't have them, the soup will be fine.)
1/2 yellow onion, diced
1 large clove of garlic, minced
Juice of 1/2 a lime
1/2 a Large Hass avocado, chopped (The name kills me.  Because they really are some large ass avocados)
A few stalks of cilantro, chopped
1 scallion, sliced thinly

Seasonings:
1/2 teaspoon of cumin (I haven't been able to say this seriously since Teresa from Real Housewives of New Jersey said she thought it was pronounced cuh-min)
A couple shakes of salt
A bit of freshly ground pepper
Barely a pinch of aleppo pepper, or any pepper, really
A few drops of hot sauce.  I used one that looked like a thoroughly unamused cowboy, but any hot sauce will do.
1 1/2 tablespoons of olive oil.  Extra virgin, none of that "light oil" crap.