I planned on going on my run today, and thinking up a super-witty, hilarious, well-organized blog post.  And then I started running.  Instead of thinking up the perfect topic and a fantastic opening line that would jump out and grab the reader, that was the best I could do.  So here goes my attempt at blog-improv:  What do you think about when you're running?  Really, sometimes it's just agonizing because there aren't any distractions.  Just you, the open road, the sound of your own breathing/wheezing, and whatever you happen to be running by (which, the other day, was a fox.  A fox, I tell ya.  If that doesn't prove to you I live in Maine, I don't know what will.  Thankfully it looked more like the first image, and not the second.) 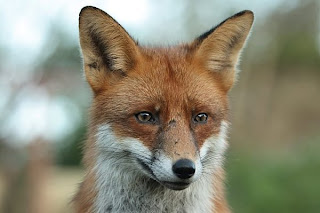 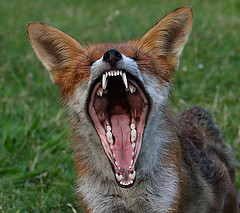 Not so calm fox.
Wildlife aside, I think the mental aspect of running is the most difficult part.  I can run through sore legs, slow down to catch my breath, but if my head isn't in it, it ain't gon' HOP-pen, to quote Glozell.  And on those days where you just aren't feeling it, suddenly you start to feel like you're falling apart because first it's something small, like a cramp in your calf, then that turns into a cramp in your quad and then your whole leg and then your whole body, and then you start to feel like you can't breathe and yeah, pretty soon you're stopping to take a quick break, which turns into a longer break which turns into walking all the way home (I call that the real Walk of Shame.)  These are the days when I really question why I run if it can make you feel so awful.
But then there are also those days when everything feels so in sync; you aren't breathing too hard, nothing's sore, and your mind seems to forget the concept of quitting a run before it's over, and even seems to want to continue running even after the workout's over.  Not to sound all hippie, but on days like those I even feel like I'm meditating.  Meditating. What?  I haven't exactly mastered the concept of sitting meditation (10 minutes feels like a lifetime.  One times for a class we had to meditate for one hour, and I almost thought I was going to go insane.  Seriously, how often do you ever just sit and do nothing?  It's much, much harder than it seems.)  But I don't think I've ever been closer to a state of meditation than on my good days of running.  Is there such a thing as transcendental running? If there is, I'm hoping that that's the state of mind I'm in during the half.
Posted by Becca B at 6:59 AM