Back for another one...

Okay, so, blogging kind of fell to the wayside as fall semester started back up.  This is mainly due to the amount of homework professors have been assigning, so blame the education system, not me. (Just kidding, government, please don't cut the education budget further than you already have.)  The race went well though, considering I decided at the start line I wanted to finish the race in under 2 hours (For comparison, my previous estimates had me finishing in two and a half hours), and somehow managed to pull that off, finishing in 1 hour and 57 minutes.  How that happened, I have no idea, but I'll take it.  Now I have some down time before the next half marathon in March (For some reason, my friend and I decided it would be a good idea to sign up for two half marathons before running one.  We were so young and naive.)

And now I segue into a topic that is near and dear to my heart stomach:

One of the things I miss most about living in a dorm is my kitchen.  The dorm has a kitchen, but it's just not as convenient, mostly because it doesn't make sense to buy ingredients that I'm only going to be able to use with one recipe, so that pretty much rules out any recipe with over four ingredients.  Alas.  I feel that I should also confess that the lack of a well-stocked kitchen has only fueled my stalking of food blogs.  And so, in memory of the kitchen I used to have, here is a roundup of the recipes I wish I were cooking this week. (If you're lucky my workload lightens up, maybe this will become a regular installment.) 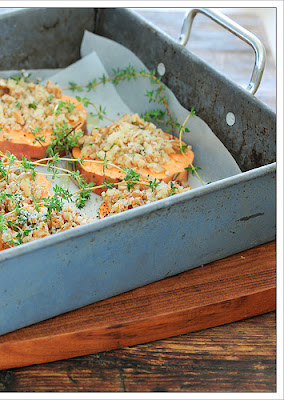 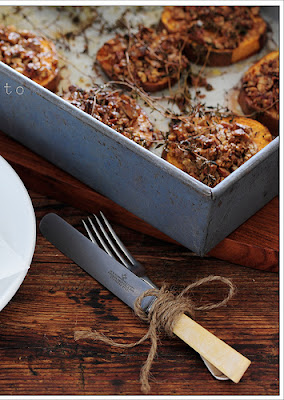 **I think I actually will be making these for Thanksgiving dinner.  There's no way a dish with pecans, sweet potatoes, thyme, and parmesan cheese could go wrong.

I love Stone Soup, mostly because Jules Clancy is committed to making every dish with 5 ingredients or less, making most of the recipes dorm-kitchen and budget approved.  Plus they all look delicious, as demonstrated by the photos above. 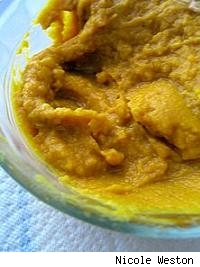 For some reason, this fall I've had an abnormal obsession with all things pumpkin, to the point where my roommate makes fun of me.  I walk past the cans of Libby's canned pumpkin wistfully, trying to think of something beyond the all-too-obvious pumpkin pie.  This recipe for pumpkin hummus offers the exciting prospect of bringing pumpkin to meals beyond dessert which ultimately maximizes pumpkin consumption, something I fully condone.

To be fair, I think I want to make everything on The Vegan Stoner simply because of the adorable drawings.  But this lentil loaf looks like the perfect fall dinner.

What do you wish you were making (or better yet, what are you actually making) this week?
Posted by Becca B at 6:44 PM